The Beasts in The Angus: The Heraldic Pelican 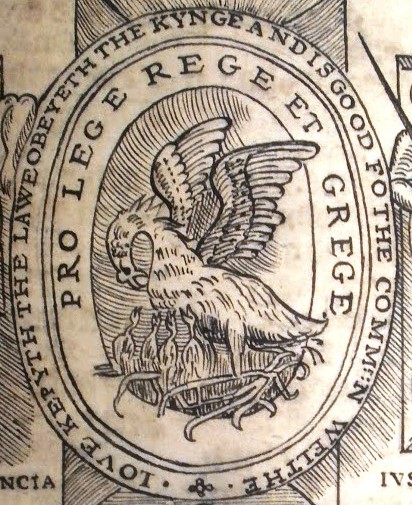 PRO LEGE REGE ET GREGE: For the Law, the King, and the Nation.
“Love kepyth the lawe, obeyeth the Kynge, and is good for the Comm’n Welthe.”


This image is from the final page of the New Testament in English, edited from the Tyndale version and printed by the London-based printer and bookseller Richard Judge or Jugge (d. 1577). Judge’s printer’s device is prominently displayed: in the medallion is a pelican feeding her children by pecking her chest.

The Medieval tale of the pelican states that when the chicks begin to grow, they rebel against their father and incite his anger. The provoked male bird kills his chicks; when the female bird returns to the nest and discovers her dead young, she pierces her breast and feeds her blood to her brood. The mother’s blood revives the chicks, the mother pelican is therefore often depicted as an emblem of piety and charity.[i]

Naturalists observed that the pelican had a red tip to its beak and small areas of crimson plumage; they therefore reported that the pelican fed its young with blood flowing from its breast. The reddish tinge on the pelican is in fact natural colouring, and the behaviour of the pelican which may have resulted in this legend is part of its ordinary feeding process. The pelican has a sack which acts as a container for the fish that it feeds to its young. When feeding its chicks, the bird presses the sack back against its neck in an action which mimics opening its breast with its bill.

As Jesus Christ set forth the redemption through His blood, which he willingly shed for His children, early Christians adopted the pelican as an emblem of Jesus Christ.[ii]


When my byrdts be slayne
With my bloude I them reuyue (revive)
Scrypture doth record,
The same dyd our Lord,
And rose from deth to lyue.”
Skelton, Armory of Birds


[i] One of the most popular books of the Middle Ages, Physiologus, contains a number of moralised tales about beasts.
Anon, Physiologus: A Medieval Book of Nature Lore, 1587, translated by Michael Curley, 2009.
[ii] J. Vinycomb, Fictitious and Symbolic Creatures in Art, 1909.
Posted by Unknown at 11:44 AM