The early nineteenth century was a period of feverish book collecting among the well-to-do in Britain and the rest of Europe. One important collection of books in England was that of a lady called Frances Richardson Currer of Eshton Hall in Yorkshire.
Thomas Dibdin, Earl Spencer’s librarian at Althorpe, thought she was the most important female book collector in Europe – not that there would have been that many! She also owned a substantial art collection and was a generous patron of local institutions.
The core of the collection at Eshton was formed by the botanical and historical books of Frances’ great-grandfather, the physician and botanist Richard Richardson (1663–1741). A catalogue made in the life-time of Frances Currer reveals her interest in works on religion. She never married and after her death in 1861, her library (consisting of an estimated 20,000 volumes) was sold by her heirs. The main sale, at Sotheby’s on 30 July 1862, raised about £6000. At a second sale, in 1916, more than £3700 was made. As a consequence, Currer’s books can be found all over the world, including one here at the Angus Library. 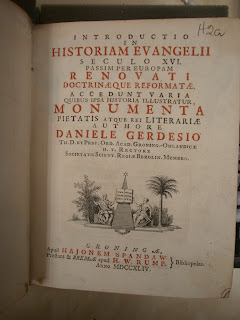 Perhaps not surprisingly, given the nature of the Angus, it is a history of the Reformation written by Daniel Gerdes (mentioned in the 1833-catalogue of Currer's collection), published in the Dutch town of Groningen in 1744. 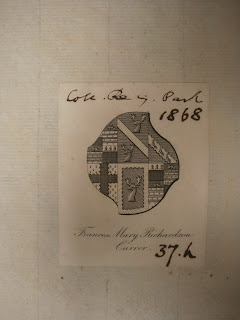 The reason we can be reasonably certain that this was Frances Currer’s copy of Gerdes’ work is that it has her bookplate pasted in at the front of the volumes (Franks 7624). The college at Regent's Park did not immediately buy the work when it was up for sale but, according to the note on the bookplate, was entered into the collection a few years later.
Which contemporary female author from Yorkshire used some of Frances Currer’s name as part of a pseudonym?

References
A catalogue of the library collected by Miss Richardson Currer, at Eshton Hall by C.J. Stewart. London: printed for private circulation only, MDCCCXXXIII [1833], p. 63
Franks bequest: a catalogue of British and American book plates bequested to the Trustees of the British Museum by Sir Augustus Wollaston Franks (1903)
Colin Lee, ‘Currer, Frances Mary Richardson (1785–1861)’, Oxford Dictionary of National Biography, Oxford University Press, 2004 [http://www.oxforddnb.com/view/article/6951, accessed 31 May 2012]
Posted by Angus at 8:50 AM