This is the final page of the New Testament in English, edited from the Tyndale version and printed by the London-based printer and bookseller Richard Judge or Jugge (d. 1577), who had his workshop in St Paul’s churchyard. The text is a colophon giving Judge’s details and it refers to the licence he was given by King Edward VI (whose portrait appears on the title page) to print the New Testament in English. Above the colophon, Judge’s printer’s device is prominently displayed: in the medallion is a pelican feeding her children by pecking her chest (a well-known symbol of Christ), flanked by two women representing prudence and justice. 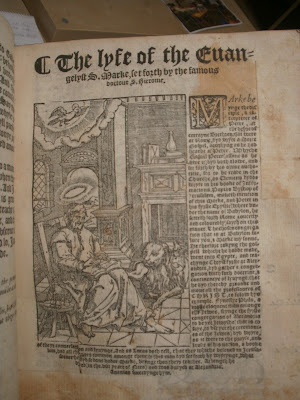 The publication itself is characterised by the use of large woodcuts and decorated initials. The Angus Library has two copies, but both have suffered damage over time.
Posted by Angus at 9:11 AM