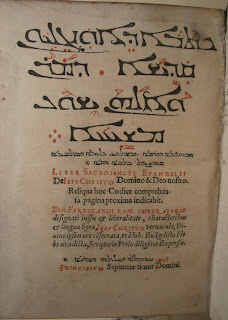 The first book printed in Syriac and the editio princeps of the New Testament in this language, printed in Vienna in 1555. It was edited by Johann Albrecht Widmanstadt (1506-1559) with the aid of Moses of Mardin, a scribe in the service of the Patriarch of Antioch, and dedicated to Ferdinand, King of Hungary and Bohemia, Archduke of Austria and Duke of Burgundy, at whose expense the work was published. Although ostensibly for Syriac-speaking Christians who were in need of a New Testament in their language, it was created partly as a missionary tool to convert Jews and Muslims in the East. It was also the product of a sixteenth-century humanistic interest in the Orient in response to the rising threat of the Ottoman Empire and the desire to go back to the roots of the Bible. According to Widmanstadt in his dedication to Ferdinand, who succeeded Charles V as Holy Roman Emperor in 1558, more scholars were able to read Hebrew and Chaldean than ever before, which went a long way to undo the linguistic dispersal after the Babel episode. This edition had a print-run of 1000 copies of which 300 were given to Moses to take to the Patriarch of Antioch. A second edition was produced by Michael Zimmermann (Cymbermannus) in 1562, after obtaining imperial licence to use the Syriac type.[1] It is mentioned in the 1611 English King James version as being in ‘most learned men’s libraries’ in the translators’ note to the reader. 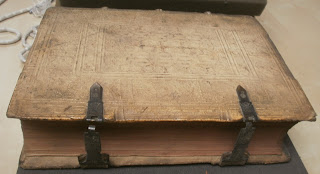 This copy was given to the Baptist Union by J.B. Sherring, who possibly inherited it from R.B. Sherring. It carries a Baptist Union Library bookplate, covering an older plate, and a note that Dr. Whitley gave the volume to Henry Wheeler Robinson. When Wheeler Robinson’s library was transferred to Regent’s Park College in 1945, it came to the Angus Library. It has a distinguished provenance in that it appears to have come from the library of the Duke of Sussex, i.e. Prince Augustus Frederick (1773-1843), sixth son of King George III and Queen Charlotte. According to the ODNB:

Augustus Frederick was a great patron of the arts and sciences. He was elected president of the Society of Arts in 1816, and between 1830 and 1838 served as president of the Royal Society. He resigned from this post to concentrate his expenses on his not insignificant library, which contained c. 50,000 volumes, including about 1000 Bibles.[2] This library was sold in stages after the Duke’s death in 1843 by the auctioneer R.H. Evans, who had also presided over the famous Roxburghe sale of 1812.[3]